Here’s the fifth state jurisdiction in my senate series – Northern Territory. Like all states, this uses the same Monte Carlo techniques to derive percentage likelihoods of election for candidates, given registered party preferences and fair expectations about my uncertainty of knowing a party's actual final vote.

I am constantly updating my calculation of primary votes to allow for the latest polls, and slightly tweaked my method for calculating minor party support to allow for more national consistency. Variation is also slightly higher to represent more uncertainty than was previously allowed for.

The NT situation is one that is very hard to predict. There are no established polls, there are a couple of new minor parties with potential to poll well, and, it’s the top end – where today’s “NT News” Page 1 story was about a psychic croc who picked the winner of the election in a “Snap” poll. I wish I was joking. 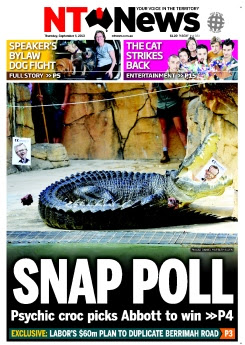 Summary:
The ALP is in trouble. With a vote in 2010 of 34.4%, and facing a national swing of 2.5%-5%, the NT could result in a fantastic outcome for the Coalition that changes the numbers in the Senate instantly. I have applied significantly high variances for all parties here owing to the unique nature of NT politics. My assumed range for AFNPP is 2%-8%, reflecting a divergence of expectations.

Both the Sex Party and the AFNPP draw preferences well, and either could well pip Nova Peris at the post to win. The NT traditionally has a low Below the Line vote, so on election night primaries will be a good indication of final outcome.

I frequently go on about anti-democratic outcomes – the Greens vote goes to AFNPP and SXP before Labor. We could see a party elected to the Senate off just 4-5% in a territory – this would be unprecedented in this nation’s history. With likely 100,000 NT voters, this means 5000 primaries may be enough to be sent to the red couches for 3 years.

Over the coming days, I will publish equivalent summaries for other states. I won’t talk about the methodology – this is largely covered in prior posts. On election day, I will republish my full final results, updated for latest polling data.

Truth Seeker takes an innovative approach to modelling actual and hypothetical the outcome of Senate elections.
1. Parties officially submitted preferences are loaded
2. Estimations are made of parties' votes, using aggregated polls
3. The Scenario Engine runs 1000 Monte Carlo simulations based on each party's estimated votes.
4. Results are tabulated, election probabilities are calculated.
Whereas most Senate estimators utilise only a single point estimate, the power of Truth Seeker's model allows for more realistic modelling of parties' likely chances of election. Also, Truth Seeker models have been used to "fact check" various what-ifs regarding what could have been alternative inter-party preference deals.